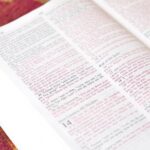 22:23 On that day Sadducees came to him, the ones saying that there is no resurrection. And they asked him, 24 saying, “Teacher, Moses said, ‘If a man dies, having no children, his brother is to marry his wife, and raise up offspring for his brother.’ 25 Now there were with us seven brothers. The first married and died, and having no offspring, left his wife to his brother. 26 In like manner the second also, and the third, to the seventh. 27 After them all, the woman died. 28 In the resurrection therefore, whose wife will she be of the seven? For they all had her.”

33 When the crowds heard it, they were astonished at his teaching. 34 But the Pharisees, when they heard that he had silenced the Sadducees, gathered themselves together. 35 One of them, a Law scholar, asked him a question, testing him. 36 “Teacher, which is the greatest commandment in the law?”

41 Now while the Pharisees were gathered together, Yeshua asked them a question, 42 saying, “What do you think of the Messiah? Whose son is he?”

43 He said to them, “How then does David in the Spirit call him Lord, saying,

44 ‘The Lord said to my Lord, sit on my right hand, until I make your enemies the footstool of your feet’?

46 No one was able to answer him a word, neither did anyone dare ask him any more questions from that day forth.

23:1 Then Yeshua spoke to the crowds and to his talmidim, 2 saying, “Upon the seat of Moses the Pharisees and scribes sit. 3 All which they will say unto you, observe and do; but their works do not do, because they say, and do not do. 4 For they bind heavy and hard to bear burdens, and lay them on men’s shoulders; but they themselves will not lift a finger to help them. 5 But all their works they do to be seen by others. They make their tefillin broad and enlarge the fringe of their garments, 6 and love the place of honor at feasts, the best seats in the synagogues, 7 the salutations in the marketplaces, and to be called ‘Rabbi’ by people. 8 But you are not to be called ‘Rabbi,’ for one is your Teacher, and all of you are brothers. 9 Call no man on the earth your father, for one is your Father, he who is in heaven. 10 Neither be called masters, for one is your master, the Messiah. 11 But he who is greatest among you will be your servant. 12 Whoever exalts himself will be humbled, and whoever humbles himself will be exalted.

13 “Woe to you, scribes and Pharisees, hypocrites. For you devour the houses of widows, and for show make long prayers. Therefore you will receive greater condemnation.

14 “Woe to you, scribes and Pharisees, hypocrites. For you shut up the kingdom of heaven in front of people; for you do not enter in yourselves, neither do you allow those who are entering in to enter.

15 “Woe to you, scribes and Pharisees, hypocrites. For you travel around by sea and land to make one proselyte; and when he becomes one, you make him twice as much of a son of hell as yourselves.

23 “Woe to you, scribes and Pharisees, hypocrites. For you tithe mint, dill, and cumin, and have left undone the weightier matters of the Law: justice, mercy, and faith. But you ought to have done these, and not to have left the other undone. 24 You blind guides, who strain out a gnat, and swallow a camel.

29 “Woe to you, scribes and Pharisees, hypocrites. For you build the tombs of the prophets, and decorate the tombs of the righteous, 30 and say, ‘If we had lived in the days of our fathers, we would not have been partakers with them in the blood of the prophets.’ 31 Therefore you testify to yourselves that you are children of those who killed the prophets. 32 Fill up, then, the measure of your fathers. 33 You serpents, you offspring of vipers, how will you escape the judgment of Gehinnom? 34 Therefore, look, I send  to you prophets, wise people, and scribes. Some of them you will kill and crucify; and some of them you will scourge in your synagogues, and persecute from city to city; 35 that on you may come all the righteous blood shed on the earth, from the blood of righteous Hevel to the blood of Zechariah son of Berechiah, whom you killed between the sanctuary and the altar. 36 Truly I tell you, all these things will come upon this generation.

37 “Jerusalem, Jerusalem, who kills the prophets, and stones those who are sent to her. How often I would have gathered your children together, even as a hen gathers her chicks under her wings, and you would not. 38 Look, your house is left to you desolate. 39 For I tell you, you will not see me from now on, until you say, ‘Blessed is he who comes in the name of the Lord.'”

24:1 Yeshua went out from the temple, and was going on his way. His talmidim came to him to show him the buildings of the temple. 2 But answering, he said to them, “Do you not see all of these things? Truly I tell you, there will not be left here one stone on another, that will not be thrown down.”

3 As he sat on the Mount of Olives, the talmidim came to him privately, saying, “Tell us, when will these things be? And what will be the sign of your coming, and of the end of the age?”

4 Yeshua answered them, “Be careful that no one leads you astray. 5 For many will come in my name, saying, ‘I am the Messiah,’ and will lead many astray. 6 You will hear of wars and rumors of wars. See that you are not troubled, for this must happen, but the end is not yet. 7 For nation will rise against nation, and kingdom against kingdom; and there will be famines and plagues and earthquakes in various places. 8 But all these things are the beginning of birth pains. 9 Then they will deliver you up to oppression, and will kill you. You will be hated by all of the nations for my name’s sake. 10 Then many will stumble, and will deliver up one another, and will hate one another. 11 Many false prophets will arise, and will lead many astray. 12 And because lawlessness is multiplied, the love of many will grow cold. 13 But he who endures to the end, the same will be saved. 14 This Good News of the Kingdom will be preached in the whole world for a testimony to all the nations, and then the end will come.

15 “When, therefore, you see the abomination of desolation, which was spoken of through Daniel the prophet, standing in the holy place (let the reader understand), 16 then let those who are in Judea flee to the mountains. 17 Let him who is on the housetop not go down to take out things that are in his house. 18 Let him who is in the field not return back to take his coat. 19 But woe to those who are with child and to nursing mothers in those days. 20 Pray that your flight will not be in the winter, nor on a Sabbath, 21 for then there will be great oppression, such as has not been from the beginning of the world until now, no, nor ever will be. 22 Unless those days had been shortened, no flesh would have been saved. But for the sake of the chosen ones, those days will be shortened.

23 “Then if anyone tells you, ‘Look, here is the Messiah,’ or, ‘There,’ do not believe it. 24 For there will arise false messiahs, and false prophets, and they will show great signs and wonders, so as to lead astray, if possible, even the chosen ones.

25 “See, I have told you beforehand. 26 If therefore they tell you, ‘Look, he is in the wilderness,’ do not go out; ‘Look, he is in the inner chambers,’ do not believe it. 27 For as the lightning flashes from the east, and is seen even to the west, so will be the coming of the Son of Man. 28 Wherever the carcass is, there is where the vultures gather together. 29 But immediately after the oppression of those days, the sun will be darkened, the moon will not give its light, the stars will fall from heaven, and the powers of the heavens will be shaken; 30 and then the sign of the Son of Man will appear in the sky. Then all the tribes of the earth will mourn, and they will see the Son of Man coming on the clouds of the sky with power and great glory. 31 He will send out his angels with a loud trumpet call, and they will gather together his chosen ones from the four winds, from one end of the sky to the other.

32 “Now from the fig tree learn this parable. When its branch has now become tender, and puts forth its leaves, you know that the summer is near. 33 Even so you also, when you see all these things, know that it is near, even at the doors. 34 Truly I tell you, this generation will not pass away, until all these things are accomplished. 35 Heaven and earth will pass away, but my words will not pass away. 36 But no one knows of that day and hour, not even the angels of heaven, nor the Son, but my Father only.

45 “Who then is the faithful and wise servant, whom his lord has set over his household, to give them their food in due season? 46 Blessed is that servant whom his lord finds doing so when he comes. 47 Truly I tell you that he will set him over all that he has. 48 But if that evil servant should say in his heart, ‘My lord is delayed,’ 49 and begins to beat his fellow servants, and eat and drink with the drunkards, 50 the lord of that servant will come in a day when he does not expect it, and in an hour when he does not know it, 51 and will cut him in pieces, and appoint his portion with the hypocrites. There is where the weeping and grinding of teeth will be.

25:1 “Then the kingdom of heaven will be like ten virgins, who took their lamps, and went out to meet the bridegroom. 2 Five of them were foolish, and five were wise. 3 For the foolish, when they took their lamps, took no oil with them, 4 but the wise took oil in their vessels with their lamps. 5 Now while the bridegroom delayed, they all slumbered and slept. 6 But at midnight there was a cry, ‘Look. The bridegroom. Come out to meet him.’ 7 Then all those virgins arose, and trimmed their lamps. 8 The foolish said to the wise, ‘Give us some of your oil, for our lamps are going out.’ 9 But the wise answered, saying, ‘What if there is not enough for us and you? You go rather to those who sell, and buy for yourselves.’ 10 While they went away to buy, the bridegroom came, and those who were ready went in with him to the marriage feast, and the door was shut. 11 Afterward the other virgins also came, saying, ‘Lord, Lord, open to us.’ 12 But he answered, ‘Truly I tell you, I do not know you.’ 13 Watch therefore, for you do not know the day nor the hour.